So you want to cut out meat, because it's really hard on the environment and as a first-world resident eating less meat is totally doable. Cool. So, what should you pack in your workday lunchbox? Here are my staples:

I ate this at least two or three times a week for months, and it was always delicious and so filling. Just take a sweet potato, wash it, poke some holes in it so it doesn't explode, and microwave for 5-7 minutes. Cut it open, add some butter, and pour on a couple tablespoons of hempseed. The nutty flavors of the hempseed are amazing with the savory sweet potato. Delicious and sooo filling. 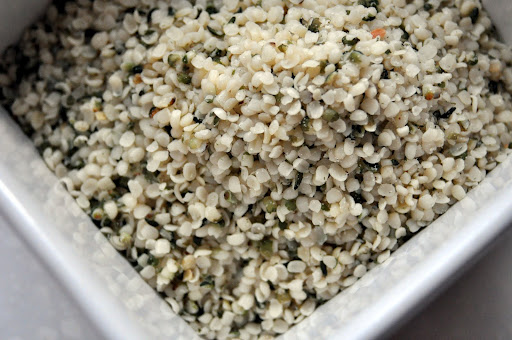 I am hempseed. Do not fear me.

These black bean quesadillas are going to be a freezer staple for me from now on. I've made three batches now, and each one lasts me several weeks. You can throw in whatever vegetables you have on hand (I always use one of my frozen bags of homegrown sweet corn and some peppers & onions) with cheese and black beans, mix it all up, and freeze. It's so easy to grab a slice out of the freezer and heat it on the stove, or even the microwave in a pinch. It takes about as much effort as making Easy Mac or ramen, but is so much better for your tastebuds and your body. 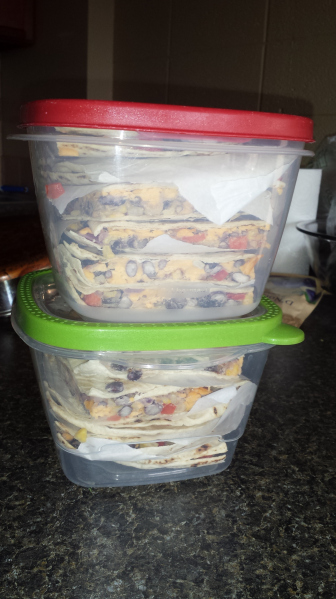 One batch of pure delight. And beans.

Substitute chickpeas (also known as garbanzo beans) for chicken for a twist on the classic chicken salad. The taste is really similar, the texture is satisfying, and you can have it on bread for lunch or crackers for a snack.

Though not as filling for as long as some of the other items on the list, PB&B sandwiches are great for beginning of the week lunches when there are fresh bananas at my office. They're so gooey sometimes I think I probably look like a dog eating peanut butter, but I don't care. The banana adds similar sweetness to jelly, but without a huge sugar crash.